Published on Monday, February 10, 2014
This article was tagged under: Bloom'N Views, How to for the Garden, Season by Season

As early as mid December, I began seeing crimes committed all over the area, terrible, heinous crimes of the landscape.  What is sad to say is that most people do not even realize they have committed CRAPE MURDER; they are simply following the lead of their neighbor’s neighbor. Unfortunately, for those folks, I feel my advice may be a bit mute for this year, but if you have not pruned your crape myrtles yet, please heed my warning and instructions.

First and foremost, you must prune your crape myrtles during the right time of year.  If you prune them later in the year, say November or December, you run the risk of having them try to produce new growth, if we get a warming trend in January, that new growth will freeze when temperatures cool again and this will be very stressful for your plant.  In actuality, pruning tells a plant it is time to grow, so hold off until later in January and February.  The next important factor to consider is to use good, sharp tools that will make clean cuts.  It is most healthful for a plant if cuts are clean and free of jagged edges or tears otherwise you are opening up the plant to potential invasion from unwanted pests and disease. 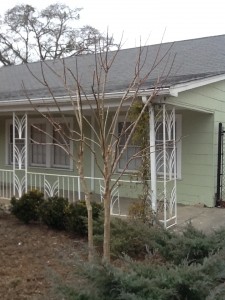 When you begin your pruning, first start by removing any dead, diseased or crossed branches, this is also a good time to remove any suckers from the base.  Next, begin thinning the canopy, a general rule of thumb is to remove twigs that are less than a pencil width.   With that done, as you examine your tree, you will typically see two lateral branches emerge close to where you cut the previous year.  You will want to head back these branches to within 6” of last year’s growth; this will prevent the “knuckle” look that can be so unattractive and unhealthy for the plant

One of the biggest excuses many people have for pruning their crape myrtles incorrectly is that they do not want their crape myrtle to be too big.  This problem is best solved by removing the tree and choosing one that is better suited to the confined space. There are many varieties of crape myrtle that grow from shrub sized to giant sized and all sizes in between.  Choose wisely from the beginning and you will be happier in the long run. Additionally, there is a fallacy that drastically pruning a crape myrtle will make them bloom more.  In reality, a correctly pruned crape myrtle will produce twice the number of branches, and therefore, twice the number of blooms than the previous year.  Additionally, the branches will be stronger and better able to withstand the weight of the heavy bloom.

If you have a crape myrtle that has been incorrectly pruned for many years, there are ways to improve the overall health and look of the plant by reconstructive pruning, a process that you may want to bring in a professional to provide. Good luck and happy pruning.