Published on Wednesday, March 26, 2014
This article was tagged under: Bloom'N Views 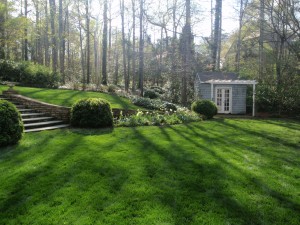 I have been driving around the past few days and have really noticed it is definitely FESCUE season, the time of year when Fescue grass really looks good. I mean FANTASTIC.  That’s saying a lot for a grass that ultimately is only viable in our area for about ten months of the year.

Basically, Fescue is a cool season grass (that means it likes cooler temperatures, more appropriately, it melts in higher temperatures), so now is the time it should look good.

Many covet their fescue simply because it is green year round, unlike its warm season grass counterparts that brown out in the winter.  Throughout my appointments, there are definitely two camps.  Of course the warm season lovers, those people who equate no winter mowing as a big plus, and those that love the year round green that fescue provides.

Here is the Fescue cycle: In September, we pull out the core aerators and puncture a multitude of holes in our lawns, yeah the lawn will look horrible, worse than a kid with chicken pox, but heck that is the price for year round green, right. Top that all off with a high quality seed and set the sprinklers to water daily, yes DAILY.  Can you imagine the water bill?  Then you are good as you move into the winter, just an occasional mowing here and there, even Fescue grass slows its growth during periods of severe cold.  Now as we move into spring, Fescue really takes off, the young blades develop and fill in, the clumps get bigger.  Yeah, Fescue is a clumping grass, so you won’t see it spread by runners. As we move into the heat of the summer, this is when our hearts sink.  Fescue absolutely hates scorching temperatures combined with high humidity and develops a nasty fungus called brown patch. If the fescue grass is in an area that is highly prized or prominent, a fungicide regime can be employed to keep the disease at bay, but due to the overall cost, many fescue owners simply let nature take its course and wait for September when the whole cycle begins again.  You ask if it’s worth it…….for someone who loves a green lawn year round, they will say, OF COURSE.